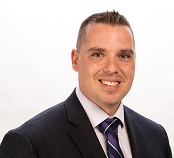 Well...why not me? With about 15,000 Realtors saturating the Kansas City market, there are a lot of good people to choose from. So why me you ask? The easy answer is, NOBODY WILL EVER OUTWORK ME! I have mad negotiating skills from being a hostage negotiator at a local police department, plus research skills from being a lead investigator in the detective unit. But to be able to answer that question properly, you really have to get an idea of what lead me to be a REALTOR®. It wasn’t even close to being my first choice as a career. I grew up ONLY wanting to be a police officer and I wasn’t going to ever stop until I accomplished that.

At the young age of 21, that badge was pinned on my chest and I felt UNSTOPPABLE. I was going to rid the world of drugs and bad guys and make it a safe place for every person walking on this earth. I fought like hell everyday to do just that. I WAS UNSTOPPABLE, until I wasn’t. The day came that broke me. It started off like just another day at the office, I was grabbing lunch at McDonald’s around noon when I received a call that changed my life forever. A two year old girl was being rushed to the hospital with life threatening injuries. I went to the scene to secure it then headed to the children’s hospital just like I have on so many cases before.

When I arrived I was taken by the arm by a social worker who told me I needed to see the victim now because I probably wasn’t going to see her alive again. She was being rushed into surgery to remove part of her skull due to her brain swelling. I began taking photographs of all the injuries and bruises that riddled her 2 year old body that was lying motionless on the operating table. This was nothing new, just another case until I looked into the eyes of this innocent 2 year old girl who was just about the same age as my daughter. Something changed inside me at that very moment I was looking in her eyes. I can’t explain it and I’ll never be able to put it into words. This was the day that broke me.

Years later, I was watching my daughter's basketball practice talking with another dad in the bleachers. We were talking about work and sharing stories when he asked if I’ve ever considered being a REALTOR®. I was said “No way, all I know how to be is a police officer.” He laughed and said “If you could deal with what you’ve just told me about, you can sell a house.” I had one of those aha moments. All these years, I just thought I could only be an officer. I didn’t realize that because I was an officer, that prepared me for so many other things. So after 14 years in law enforcement, I gave up my identity to eventually transformed into what I am today. The Hardcore REALTOR®!

I tell this story to you, not to ask for pity of what I’ve done or what I’ve been through, but to give you let you know that no matter what gets thrown at me during a real estate transaction, nothing will ever compare to what I’ve already done. I have a team beside me that all has similar experiences. They come from law enforcement, child services or other similar backgrounds. They can’t be phased!

So to answer the question why choose me to handle the biggest transaction of your life. Well, Why not me?